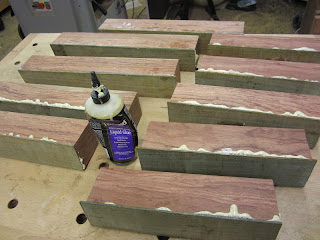 I've been making a batch of 10 smoothers and jack planes. The picture above shows the squeeze out from polyurethane after gluing on the lignum vitae soles, no other glue would be suitable for this very oily wood.
Up to now I've used Titebond yellow glue for gluing the plane sides on, this works well but can creep slightly over time which makes the glue line detectable with your finger tips. 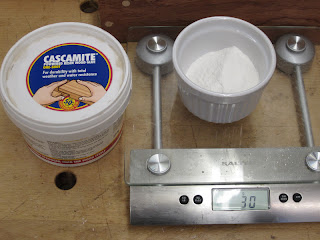 When I trained at the Barnsley Workshops their glue of choice was a powdered resin glue such as Cascamite and I know Alan Peters used this a lot on his furniture. It dries rock solid with no creep at all, but is is more fiddly to use requiring accurate mixing, 30 gr of powder to 15 gr of water. Digital scales come in very handy for small amounts, they just require sneaking in and out of the kitchen when the wife isn't looking! 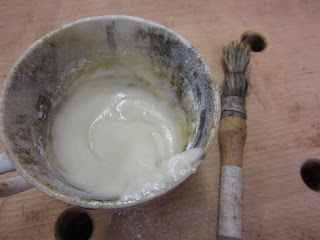 After about 30 seconds of mixing here is the result ready for use. It has a much longer open time than yellow glue which is nice but it takes longer to fully harden especially if it's cold. Also whatever is left has to be discarded. 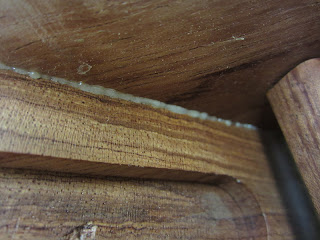 This is dried glue line on the inside of a smoother, thankfully I sealed and waxed the interior before glue up, so the beads just popped off with a sharp chisel. 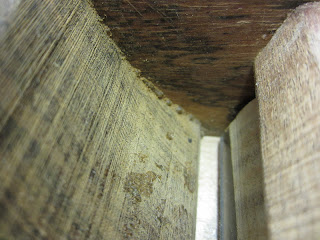 I had noticed that James Krenov used resin glue when he made his planes, here are some of the glue beads left on the inside of one of his planes. 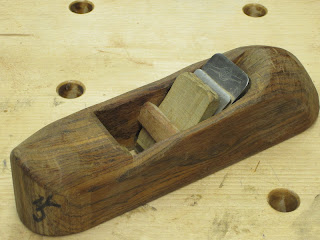 Here is a shot of the whole plane, he made this when his eye sight was fading, not pretty but very comfortable to hold. Handling a few of his planes helped me a lot with my plane designs, although I don't think I would sell very many if I left them straight from the band saw!
Posted by David Barron at 12:08