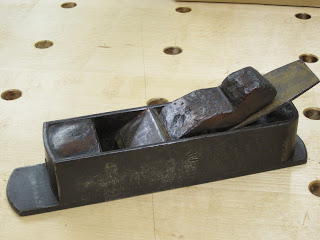 This is one of my other purchases from the David Stanley auction, the catalogue described it as an old mitre plane with an illegible name stamp. I felt sure I could could uncover the name so I took a chance and bid. 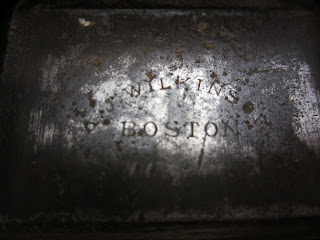 The name stamp came up well but it wasn't one I recognised, A J Wilkinson Boston. A trawl through Goodmans British Planemakers yielded nothing so I guessed this was Boston Mass and not Boston Lincs. A quick search on Google confirmed this and I found him to be a tool maker and dealer dating from 1842 until  the 1990's. This plane is definitely from the earlier period with the extended toe and dovetailed construction. This is bourne out by the lack of '&Co' on the name stamp, which appeared on later tools. 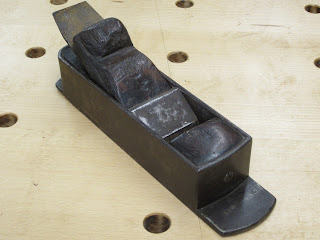 The wedge has seen some action but is original, not sure of the wood perhaps oak or elm? 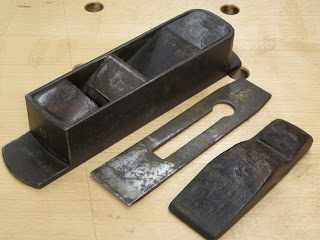 The iron fits tightly with both the wedge and the mouth so is probably original, the square end to the slot is also an early feature. It is stamped Ward and Payne, a famous Sheffield blade maker operating from 1860 to about 1900, so these dates fit. The blade is an odd size at 1 7/8" wide. 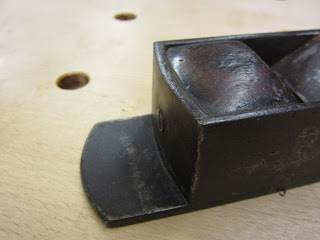 The overall styling is quite plain but the front has a nice curve to it. If anyone can shed any more light on this plane I would love to hear from them.
Posted by David Barron at 12:24