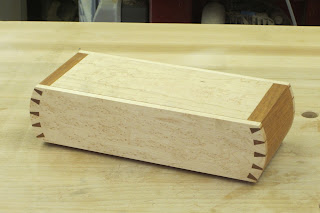 Having recently made a box with angled dovetails I decided to have a go at curved dovetails, not so easy! 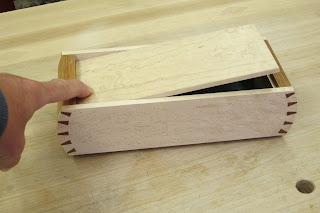 The woods are birds eye maple and Brazilian mahogany. 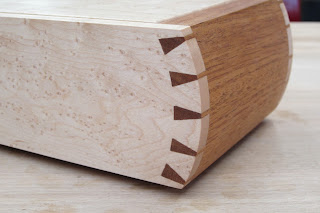 The base is padded with a lining of green pig suede. 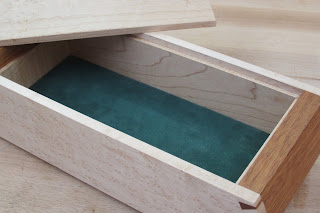 The starting point was to lay out the radius of the dovetails and decide on their size. This way the thickness of the piece for the pins could be established as well as the number of dovetails.
It was also a useful exercise as it showed that the normal end pins would have looked very chunky. So instead of having half pins on the end I went for five full pins which looked much better. 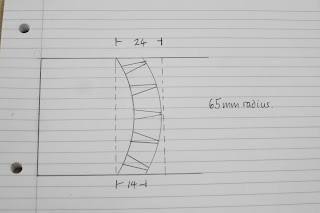 In order to get matching curves on the pins and tails I 'assembled' the box using double sided tape and then marked out the radius from the template above. It was important to get both ends flush and square. 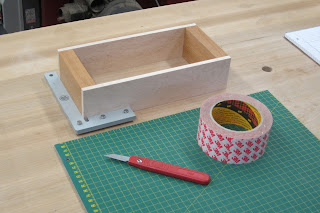 The result after roughing on the band saw and smoothing on the disc sander. I used a fine 220 grit disc which was a little slower but much less risky and it left a very fine finish. The parts were all marked up with coloured dots before separating carefully with spreader clamps. 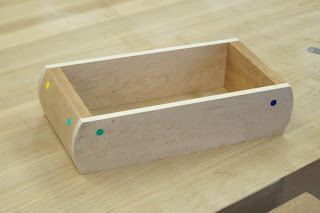 I had initially expected to use the side of my cutting gauge designed for curves but this lost it's support before reaching either end so was no good. Instead I had to decide on the depth and then use the curved piece as a template and vice versa for the pins, not ideal! 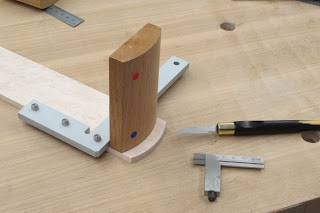 Here is a tail board marked out and then dovetails cut. The bottom of the tails was simply cut square rather than try to follow the curve over such a short distance. Doing the same to the pins gave a good fit in the end. 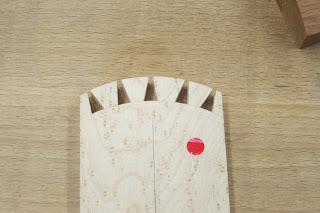 Here is a pin board which looks a bit ungainly, although as you can see form the first pictures it looks much better when assembled. Maintaining a flat interior face was essential as a reference surface and keeps the interior of the box nice and square.
I really like the look of this box although it showed me the need to be dead accurate with my dovetail spacing as well as the angles, rather than eyeballing it. I will be devising a jig which will enable me to achieve this more accurately on the next box. 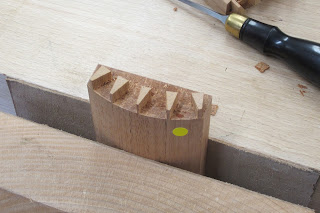