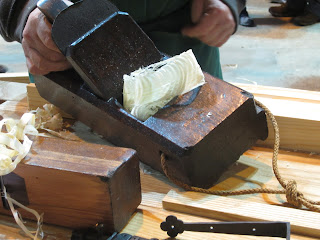 I've never seen anything like this before. It is a cornice plane made by Philipson around 1750 and it's a valuable thing. Although made in England it would almost certainly have been made for the US market as all the English cornices were made of plaster and not wood. 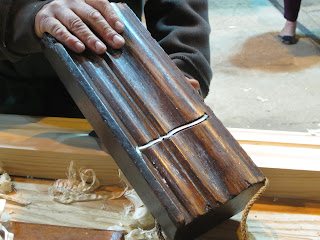 Here is the profile of the blade which must be 4 to 5" wide. 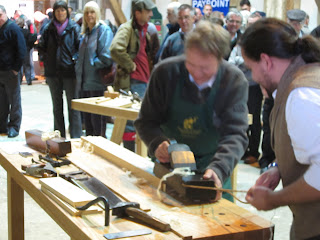 Amazingly the plane is still in working order, the owner Richard Arnold is the one doing the pushing and Richard Maguire is pulling, this is definitely a two man job. Richard believes they would have relieved some of the profile first with smaller moulding planes leaving the monster to clean up the overall profile. 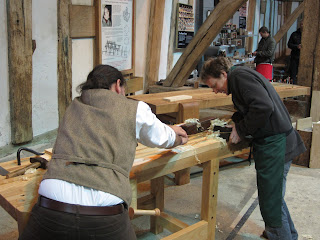 The wonderful brown oak bench mentioned in my previous post can be seen in the background, my apologies for not having taken a better shot, maybe better shots will turn up on the Maguire blog http://www.theenglishwoodworker.com/ which is well worth looking at. 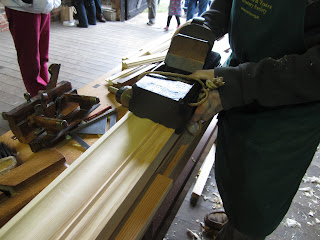 Here is the finished softwood profile which was remarkably crisp and even. Richard (Arnold) and his wife freely gave up their weekend to bring a fine selection of antique planes for the benefit of the show goers. Although he had stiff competition from Veritas and Lie Nielsen as well as my own stand, I think the prize for the biggest pile of shavings at the end of the show had to go to Richard........ and all done with 200 year old planes!
Posted by David Barron at 08:15