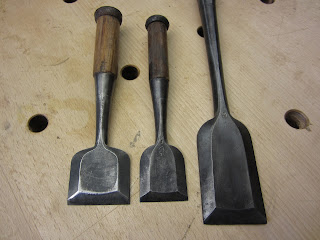 Here are the three Japanese chisels I bought from one of the traders at the David Stanley Auction. You can see how big the slick is, the handle isn't even in shot! 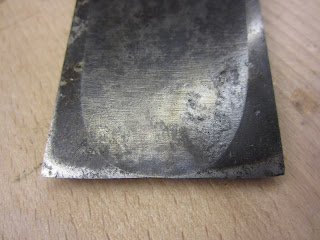 Two of the three had been used through to the hollow which required attention. I have often heard this as a concern,voiced by woodworkers at shows, which has prevented them from ever experiencing the pleasures of owning and using Japanese chisels. The traditional method is to 'tap' the bevel side until this causes a bulge in the backside which then allows the hollow to retreat when ground. However this method requires skill and the danger of cracking the hard steel is great. It is much easier to simply work the back on a course diamond stone or similar until the edge is reformed. This work would be necessary anyway to get through all the pitting on the back of these chisels 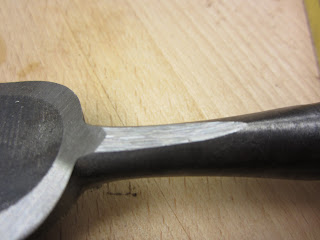 Before starting I like to grind a little hollow in the neck to make sure that the chisel doesn't ride up the neck which would give very inconsistent results. This is a good idea on all new Japanese chisels as well. 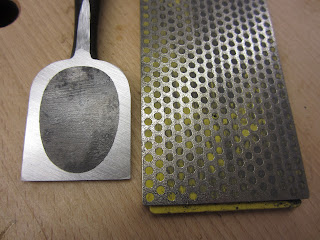 After about 15 minutes work the pitting is remove and 1/4" of fresh edge is revealed, what a difference! 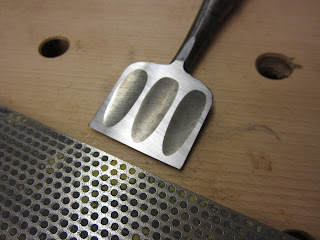 Here is the 2 1/8" wide chisel and its multiple scoops looking much happier. 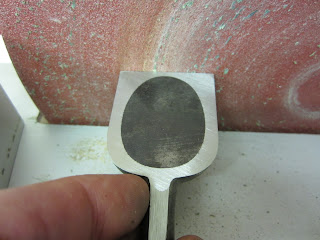 If, as with these, the edges aren't straight it is much better to carefully straighten them before attempting to sharpen the bevel, this gives you a nice straight edge to work to. I'm using a disc sander, don't abrade any further than you need to. 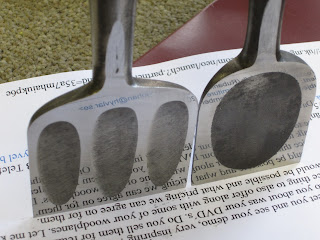 Here are the two smaller chisels flattened and polished on an 8,000 grit stone with the obligatory print refection. 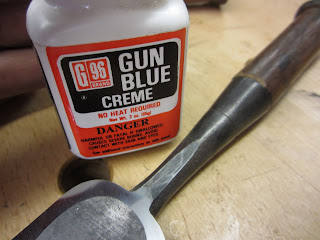 I used gun blue to darken the relief in the neck to make it blend in with the patination of the rest of the metal. 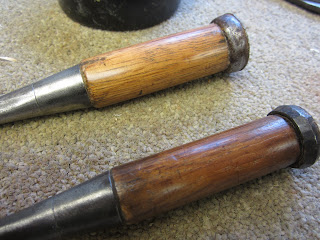 Finally the handles were cleaned with orange oil and 0000 wire wool before being given 3 coats of laqueur, cut back with 600 grit and coated in wax. All in all a pleasing 1 1 /2" hours work. I might save the monster slick for another day!!
Posted by David Barron at 02:19