Shooting Board Plane in Lignum Vitae 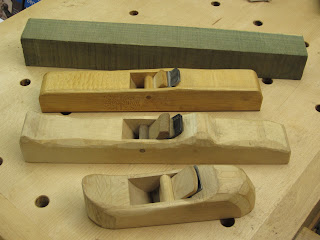 I have been thinking about making a dedicated shooting board plane for some time, a plane to be used for long as well as cross grain. The planes above were acquired some time ago from students of James Krenov and the one at the back was particularly comfortable used on its side. It was made from maple and was much lighter than I was looking for, I also wanted it to be higher (or wider when on its side). The blank at the back is solid Lignum Vitae, it doesn't get much heavier than this! 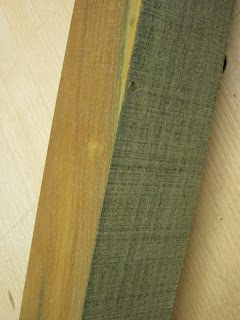 Here is close up of the blank showing the colour change when the lighter coloured surface is protected from the sunlight. 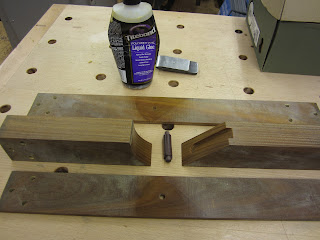 Here are the components of the plane ready for glue up. Polyeurathane glue is the only real choice with this extremely oily wood. I finished and waxed the interior of the plane so that the foaming squeeze out would easily pop off. 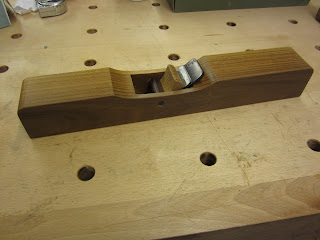 The finished shape is a little unusual but I did a lot of experimenting before settling on this. It maximises the width on its side which also adds to the weight for momentum. The cut out allows full access to the blade for adjusting as well as providing a comfortable and natural hand hold. 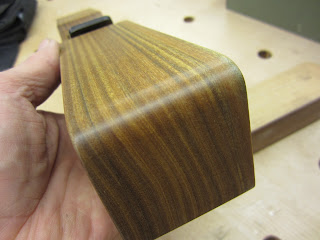 the Lignum came up very nicely and you can see this piece is bang on quarter sawn which will prevent the base from cupping. 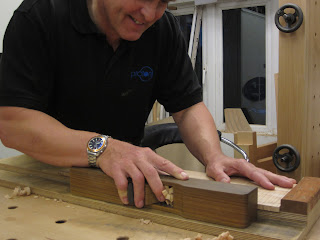 In use it worked like a dream with the immense density taking all I could throw at it.
By the way the bench in the background is not a radical new design, just my demonstrating bench awaiting laoding for the European Woodworking show at the weekend.
Posted by David Barron at 13:00